[[ See Amendment at end for clarification of the original version of this essay. ]]


Score one for digital dualism. The Cannibal Cop is free.

As I explained in this space last year, the twisted imagination of New York City police officer Gilberto Valle — aka “the Cannibal Cop” — provided a lurid opportunity to examine the question of where the line can be drawn between fantasy and reality in the era of the Internet.

To recap: By chance one day, Valle’s wife happened to sneak a peak at the browser history on her husband’s computer. She discovered to her horror that for some time he’d been engaged in a series of online chats in which he discussed detailed plans to rape, torture, murder, dismember, cook and eat a number of women he knew, including her.  A computer-forensic examiner subsequently found evidence that he had searched the web for human meat recipes.

Valle was arrested and charged with conspiracy to commit kidnapping, a felony that could have put him in prison for life. At trial prosecutors argued that, although no woman was ever attacked, by making plans to carry out the deeds he’d discussed online, Valle had “crossed the line” between fantasy and reality. The jury was convinced, and for the past year and a half Valle has been incarcerated in the Metropolitan Correctional Center in Manhattan, his sentencing on hold pending appeal. 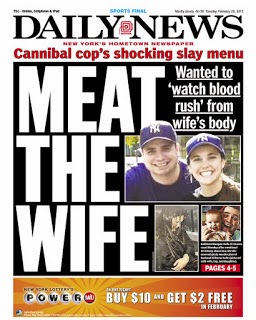 On Monday Valle won his appeal, and yesterday he was released. Judge Paul Gardephe of Federal District Court ruled that, contrary to the prosecution’s argument, at no point did Valle’s crimes exceed the bounds of “fantasy role play.”

“Despite the highly disturbing nature of Valle’s deviant and depraved sexual interests,” Judge Gardephe wrote, “his chats and emails about these interests are not sufficient — standing alone — to make out the elements of conspiracy to commit kidnapping.”

This affirmed the argument made during the trial by Valle’s defense attorneys. As one of them put it yesterday, Valle “is guilty of nothing more than very unconventional thoughts. But, as Judge Gardephe has validated, we don’t put people in jail for their thoughts.”

My blog post last year characterized the positions of the prosecution and the defense in the case as representing in fairly clear fashion the topographies of “digital dualism’ as defined by the best-know critic of that stance (and coiner of the term) Nathan Jurgenson. To think that there is some fundamental distinction between online reality and offline reality, Jurgenson argues, is to construct a false dichotomy.  In truth, the digital and the physical are “enmeshed.” We carry our offline selves into our online encounters and vice versa.

Although they presumably didn’t know it, the jurors who convicted the Cannibal Cop affirmed Jurgenson’s view. Judge Gardephe’s decision rejected it. No doubt questions over where the line exists between online fantasy and offline reality will continue. I personally believe there is such a line — I confess, I’m a digital dualist — but I don’t doubt that by spending more and more time absorbed in our devices, we will increasingly be unable to distinguish between the two.

After I'd posted this, I got a nice message from Nathan Jurgenson telling me that I had overplayed his definition of digital dualism. He never meant to argue, he says, that there is no difference between digital reality and physical reality.

As I told Nathan in reply, I think I failed to adequately explain my own take on the digital dualism question, which is an existential one. That is, the ideas, convictions, and conceptions we project out into the real world, in our behaviors, are based on or derive from a consciousness that tends to blur fantasy and reality, more so than ever with the help of the Internet. Nathan responded that this is completely in line with his own thinking.

I probably should add an admission that I couldn't resist the temptation to use the Cannibal Cop case to play around a bit with these questions, and maybe its sensationalism doesn't bear too serious a look at the digital dualism issue.

Thanks to Nathan for the correction!