Say It Ain't So, Joe: A Football Machine Jumps the Rails 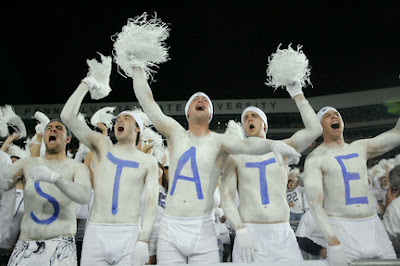 One of my favorite observers of current affairs is James Howard Kunstler, the author of The Geography of Nowhere and other books. Last week he posted on his blog a commentary on the Penn State football scandal that typically combined astute social and political analysis with moral jeremiad. Its opening sentence captures the flavor of his style:
"The Penn State football sex scandal, and the depraved response of the university community at all levels, tells whatever you need to know about the spiritual condition of this floundering, rudderless, republic and its ignoble culture."
Kunstler's essay made me think more about the Penn State scandal and its relevance to the question concerning technology. I'll list here a few connections that came to mind, using as a lens the thought of Jacques Ellul.


Technique is the word Ellul used to acknowledge that technology is more than just machines. It is a systemic phenomenon that encompasses, in addition to machines, the systems in which machines exist, the people who are enmeshed in those systems, and the modes of thought that promote the effective functioning of those systems.
Ellul defined technique as "the translation into action of man’s concern to master things by means of reason, to account for what is subconscious, make quantitative what is qualitative, make clear and precise the outlines of nature, take hold of chaos and put order into it.”
The relentless drive to bring all aspects of the technological society into conformity with the demands of technique is what I mean when I say that such a society is not, technically speaking, "rudderless" at all. We tend to overlook the steadiness with which we proceed on our technological course, given that it creates an infinite variety of disruptions in its wake.

Backpedaling now, Kunstler's use of the word "rudderless" was entirely accurate in the sense he intended. That is, we are rudderless because we are not in truth guided by the moral, ethical, or legal standards we profess to be guided by, or even by what might be considered common sense.
The disjunction between our professed values and the values of technique leads to all sorts of hypocrisies. As Kunstler pointed out, college football programs are supposed to be about building character. In truth, as everyone knows, their primary purpose is to produce profit and institutional growth through various mechanisms, including TV contracts, sales of tickets and merchandise, alumni donations, student enrollments, and brand loyalty (also known as "school spirit").
As the owner and operator of one of the nation's most profitable sports machines, it's hardly surprising that for Penn State, keeping the machine running was more important than stopping child rape.

There's an apparent contradiction between technique's emphasis on rationality and the antithesis of rational behavior displayed by Penn State's student body in the wake of Joe Paterno's firing. In fact, as Ellul pointed out, riots and technique go hand in hand.
Mob psychology is one of the chief goals of technique in a consumerist society. Individuals are molded, with the help of journalism, entertainment media, and advertising, into a manipulable mass. The "chief requirement" of propaganda, Ellul said, is "to produce individuals especially open to suggestion who can be easily set into motion….The critical faculty has been suppressed by the creation of collective passions.”
Ellul also noted that propaganda has the power to create a "new sphere of the sacred," a sphere that is beyond criticism. Obviously, as far as Penn State was concerned, Joe Paterno had entered such a realm.

Like many people, I was appalled by the rioting of the Penn State students, but their behavior was hardly inexplicable. They are, after all, children of the technological society, and thus products of that society. In the minds of many people extreme displays of emotion, often verging on violence, are part of the point of being a fan at sports events. College students today are also coming of age at a time when the excesses of technique have created a series of conditions that make the transition to adulthood especially challenging.
Ellul argued repeatedly that the technological society requires that human beings adapt to the conditions of technique, and that doing so creates a host of psychological insecurities. In order to allay those fears, technique provides various mechanisms of release and distraction. Sports hysteria fits that bill nicely. It makes little sense to expect rational behavior in the context of that hysteria.

One of the key reasons sports qualifies as technique is its emphasis on performance. "Technique is the instrument of performance," Ellul said. "What is important is to go higher and faster; the object of the performance means little.”
As the affirmation of performance, winning outstrips such niceties as character building, honor, or sacrifice for community. No coincidence that the emphasis on performance in sports parallels the emphasis on performance in business. Since the Industrial Revolution we've witnessed the introduction of an unbroken string of performance-enhancing techniques, from the assembly line to the human resources department. Emphasis on superior performance has been with us since ancient times, of course. The difference today is that the standard against which we measure ourselves is the machine.
The use of performance enhancing drugs in sports is entirely consistent with those priorities. Here, too, it makes little sense to be surprised by behavior that exactly fits the context in which it appears.
Today technology allows us to indulge our preoccupation with performance as never before. Doctors recommend a host of screening procedures that may or may not lengthen lives, while participants in the "quantified self" movement track every biological function, apparently in hopes that the constant monitoring of personal statistics will somehow provide a meaningful route to self knowledge.
Surely this was not what Socrates had in mind when he said the unexamined life is not worth living.
Photo Credit: Sean Simmers, The Patriot-News