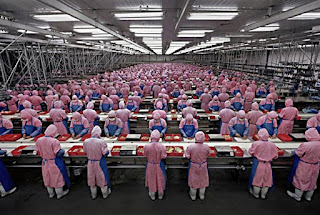 Yesterday the New York Times published a comprehensive report on labor conditions at Chinese factories that manufacture products for Apple Corps. According to the Times, Apple had been publicly warned of unsafe conditions at an iPad plant where explosions killed four people and injured 77.

“If Apple was warned, and didn’t act, that’s reprehensible,” said Nicholas Ashford, a former chairman of the National Advisory Committee on Occupational Safety and Health, a group that advises the United States Labor Department. “But what’s morally repugnant in one country is accepted business practices in another, and companies take advantage of that.”


The plant where the explosions occurred is owned and operated by Foxconn, which also supplies electronics products for Amazon, Dell, Hewlett-Packard, Nintendo, Nokia, and Samsung. More than 120,000 employees work there, often putting in 12-hour days, six days a week. Banners on the walls carry slogans such as, “Work hard on the job today or work hard to find a job tomorrow.” One of the employees killed at the plant made $22 a day, a relatively high salary by Foxconn standards.


The Times article quotes a former Apple executive (speaking anonymously because of confidentiality agreements) as follows:

“We’ve known about labor abuses in some factories for four years, and they’re still going on. Why? Because the system works for us. Suppliers would change everything tomorrow if Apple told them they didn’t have another choice. If half of iPhones were malfunctioning, do you think Apple would let it go on for four years?”

A current Apple executive is quoted as follows:

“You can either manufacture in comfortable, worker-friendly factories, or you can reinvent the product every year, and make it better and faster and cheaper, which requires factories that seem harsh by American standards. And right now, customers care more about a new iPhone than working conditions in China.”

[Speaking of exploiting labor, thanks to the Internet and various digital devices manufactured in China, readers of The Huffington Post, The Daily Beast, and, no doubt, countless other aggregators, as well as this blog, are able to read the New York Times article on factory conditions in China for free. This saves us the bother of contributing a penny to the salaries, pensions, or health care of the journalists responsible for the report, who interviewed more than three dozen current and former Apple executives and contractors. The image used to illustrate this post (taken at the Foxconn plant where the explosions occurred) was posted on the web without credit to the photographer, copied from Google Images, and also used for free.]