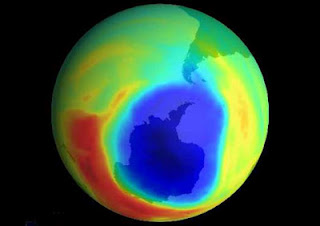 The New York Times reports today that some American companies are making big profits selling a gas that's been banned by international treaty because it damages the ozone.

DuPont makes more HCFC-22 than it can sell legally in the States and exports it to countries like Mexico. Marcone, a major supplier of appliance parts based in St. Louis, was recently convicted of selling smuggled HCFC-22 to American retailers with a discount promotion it called "Freaky Freon Fridays." A federal prosecutor testified that the senior vice president in charge of the operation was considered "a hero" in the company because of the revenue he was bringing in.

Indeed, the profits involved in selling HCFC-22 are such that it's actually becoming more abundant and cheaper on the global market than it had been before the treaty banning it went into effect, the Times says.

The vast amount of goods shipped internationally in the global economy makes it easy to smuggle HCFC-22. According to the Times, some of the gas sold by Marcone was made in the U.S., sold to Mexico, then smuggled back into the States. Another shipment had been manufactured in China and exported to Ireland and the Dominican Republic before being shipped by freighter to Miami, hidden in cargo containers among other, legal goods. Fake invoices were produced to fool Customs inspectors.