The Inconvenient Truth of Technological Autonomy 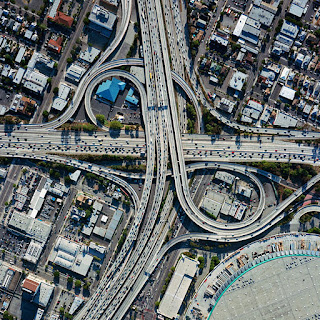 Most of us recall Captain Renault's famous pretext for closing Rick's Café in "Casablanca." "I'm shocked!" he gasped. "Shocked to find that gambling is going on in here!"

That pretty much sums up my reaction to Naomi Klein's recent article in The Nation magazine, in which she reveals the dirty little secret of global warming: The only chance we have of avoiding its devastating consequences is to radically curtail the rampant consumerism on which our economy currently depends. That, in turn, will require the imposition of a broad range of government regulations that will effectively put an end to the so-called "free market" so cherished by the Republican right.

The above is not intended to denigrate Klein's article in any way. It's a fine piece of journalism and I'm pleased it's attracted the attention it has. (Note in that regard the interview with Klein on the New York Times environment blog, Dot Earth.) Having said that, it's also true that Klein's "inconvenient truth" is hardly a revelation. Anyone who's been paying attention recognized long ago that consumerism and the technologies on which consumerism thrives are the forces responsible for driving the planet over the edge of ecological sustainability. It's also been obvious that reversing that fatal progression will require massive social, political and economic change, change impossible to accomplish without equally massive government intervention.

I realize that's an anti-democratic statement, but it's hard to have faith in democracy when we read, for example, that a majority of Americans are gullible enough to accept the propagandists' claims that climate change is a fiction, and complacent enough to act, or fail to act, accordingly. Klein quotes poll results showing that the number of Americans who believe that burning fossil fuels causes climate change has fallen from 71 per cent in 2007 to 44 per cent in 2011.


(I should pause here to state that I generally favor skepticism toward the claims of experts. In this case, however, the scientific consensus is overwhelming, and I don't find it hard to believe that human activity has an impact on the environment. This is especially true when I can see evidence of that impact – smog, for example – with my own eyes. It seems obvious, too, that if anyone has an ulterior motive in this debate, it's more likely to be the forces fighting the scientific consensus. Even if we concede that there's uncertainty in the data, the stakes here seem awfully high. Thus the question I always want to ask the climate change deniers is, "Okay, but what if you're wrong?")

The same week that Klein's piece appeared, a report was issued by the Global Carbon Project (a group of scientists, of course) stating that global emissions of carbon dioxide from fossil fuel burning jumped by the largest amount on record last year. The report said this was almost certainly the largest absolute jump in any year since the Industrial Revolution, and the largest percentage increase since 2003. The fact that this news received what can only be described as ho-hum play in the major media (the Penn State child rape scandal attracted far more attention) is further indication that American democracy isn't quite up to the challenges we face.

More tangible evidence of that inadequacy confronts me on the New Jersey Turnpike each week as I drive from Philadelphia to New Jersey to visit my daughter. Billions of tax dollars are currently being spent on a series of highway expansion projects that make the building of the Egyptian pyramids look like a student crafts fair. The scale of labor and resources involved is astounding, as is the insanity of making such a commitment to the automobile in the face of overwhelming evidence that we ought to be moving as fast as possible in the opposite direction. (And yes, I recognize my own participation in the insanity by making that weekly drive.)

All this brings me to the subject of technological autonomy, a central issue in the philosophy of technology, and the focus of a pivotal chapter in my book.

Technological autonomy is a shorthand way of expressing the idea that our technologies and technological systems have become so ubiquitous, so intertwined, and so powerful that they are no longer in our control. This autonomy is due to the accumulated force and momentum of the technologies themselves and also to our utter dependence on them.

The philosopher of technology Langdon Winner has referred to this dependence as the "technological imperative." Advanced technologies require vast networks of supportive technologies in order to properly function. Our cars wouldn't go far without roads, gasoline, traffic control systems, and the like. Electricity needs power lines, generators, distributors, light bulbs, and lamps, together with production, distribution, and administrative systems to put all those elements (profitably) into place. A "chain of reciprocal dependency" is established, Winner says, that requires "not only the means but also the entire set of means to the means." Winner also points out that we've typically become committed to these networks of technological systems gradually, unaware of how irreversible those commitments will become, or the consequences they will ultimately entail. He calls this "technological drift."[1]

To many people, the idea that we've lost control of the machines in our lives is absurd, a fantasy out of science fiction. Setting aside the fact that, from Mary Shelly on, science fiction writers have understood the implications embedded in technology better than almost anyone else, allow me to quote on this subject two individuals who can't easily be dismissed as crackpots.

One is the late historian and head of the Library of Congress, Daniel J. Boorstin. In 1977 Boorstin wrote that technology had emerged as the dominant force in American culture and that its proliferation was beyond our control. "We live, and will live," he said, "in a world of increasingly involuntary commitments."[2]

One reason this was so, Boorstin said, was that no technology can be uninvented. "While any device can be made obsolete, no device can be forgotten or erased from the arsenal of technology. While the currents of politics and of culture can be stopped, deflected, or even reversed, technology is irreversible."

Another conspicuously rational person who expressed similar thoughts was the physicist Werner Heisenberg. In his book Physics and Philosophy (1958) Heisenberg called technological expansion a "biological process" that was overtaking even those nations who would have preferred not to pursue it. "Undoubtedly the process has fundamentally changed the conditions of life on earth," Heisenberg said; "and whether one approves of it or not, whether one calls it progress or danger, one must realize that it has gone far beyond any control through human forces."[3]

In my book I argue that the processes Boorstin and Heisenberg identified have enmeshed us ever more deeply in a state of "de facto technological autonomy." By that I mean that although we can theoretically detach ourselves from the technological systems on which we've come to depend, practically such a detachment is impossible because it would create unsupportable levels of disruption. Naomi Klein didn't use the words "technological autonomy" in her article in The Nation, but that's what she was talking about.

It's hard not to be a pessimist when one faces squarely the scope of social, political, and economic change that will be required to avert catastrophe, especially when we consider that global warming is only one of the dilemmas with which technological autonomy presents us. Nuclear power is another example. The New Yorker magazine has reported that the post-tsunami meltdowns in Japan initially prompted a wave of plant closures there, but that most of them have since re-opened. To undertake permanent reduction of the nation's reliance on nuclear energy would be, in the words of its economics minister, "idealistic but very unrealistic."[4]

Clearly, to extricate ourselves from the grip of technological autonomy will require reversals that are almost literally unimaginable. For that reason one can see that the resistance of the climate change deniers may be logical as well as suicidal. If Klein is right, what they're really saying is that the patient wouldn't survive the surgery.

That, of course, is where the idea of geoengineering comes in. Our commitment to technology has now become so irrevocable that technology itself may well be our only savior. What sort of world that will leave us with is a question no one can answer. The evidence on display as I make my weekly drive up the turnpike isn't encouraging. 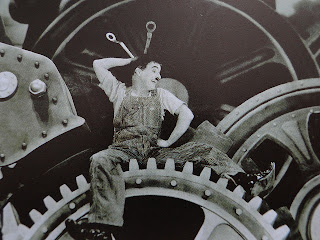 Just a note to say that Cyborgology posted my essay today on how the Occupy Wall Street evictions demonstrate the prescience of Jacques Ellul. This piece incorporates material from my earlier post on acceptable resistance, but is (again, I admit!) more concise. Thanks to PJ Rey of Cyborgology for inviting me in.
Posted by Doug Hill at 9:03 AM No comments:

OWS and the Usefulness of Acceptable Resistance 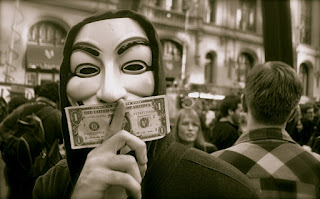