A couple of weeks ago I came across a YouTube video from Singularity University entitled "Nanotechnology- Future of Everything." A minute and 24 seconds long, it features Jason Silva, who, according to his web site, has hosted a National Geographic series called "BrainGames" and a YouTube series called "Shots of Awe." Silva calls himself a futurist and a philosopher. On his web site he adds "storyteller" and "keynote speaker" to the list. His web site provides no credentials that attest to any particular expertise in technology, but what he lacks in degrees he makes up for in breathless intensity.

It's hard to overemphasize Silva's manic, almost hysterical delivery, which is further intensified by swooshing sound-effects and gee-whiz animations, all rushing by at breakneck speed. Silva seems to believe that excitement equals veracity. It doesn't, or shouldn't, but like all carnival barkers, his spiel isn't about facts. It's about sales, and what he's selling is technological utopia. 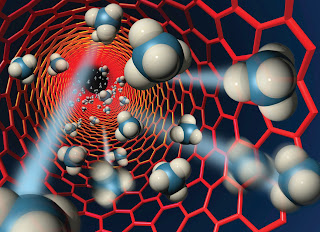 Silva starts his video by stating (breathlessly) that "nanotechnology is about to transform the world in ways we can hardly even fathom." It will allow us, he says, to pattern atoms in the physical world much as computer technology allows us to pattern information in the digital world. "All of a sudden we can have buildings that assemble themselves, all of a sudden we can move beyond scarcity…We can turn anything into anything else."

What this means, he continues, is that all our problems will soon be solved. "The age of fighting over scarce resources, the age of scarcity, is upended. We move into a world of infinite abundance. This changes the nature of economics, the nature of manufacturing. It essentially makes the world a programmable medium that can be shaped by thought and intentionality. It turns the physical world increasingly into a condensation of human imagination. It's going to change the game." 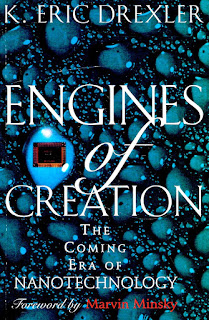 Silva cites a single source for these predictions: Eric Drexler's 1986 book, Engines of Creation: The Coming Era of Nanotechnology. Drexler's no slouch when it comes to technological utopianism, but he's no match for Silva when it comes to sheer hype. The claim that nanotech "turns the physical world increasingly into a condensation of human imagination" is one of the best examples of runaway technological hubris I've ever heard.

Watching Silva's video made me so angry that I unleashed a series of tweets that were probably as nasty as anything I've ever posted on line. I said the video earned him the "Biggest Asshole Enthusiast Award," and I went on to post several quotes from scientists who said the predictions in Engines of Creation—the same predictions Silva repeats as gospel in his video—have no basis in reality. My source was a 1999 article in MIT Technology Review entitled "Will the Real Nanotech Please Stand Up?"

Here are the quotes I tweeted:

Engines of Creation is "a utopian vision that few researchers doing experiments on the nanoscale have bought into."

“There has been no experimental verification for any of Drexler’s ideas."

"Few chemists, physicists or materials scientists see any evidence that [Drexler's predictions] will be possible."

"[Drexler] has had no influence on what goes on in nanoscience." His ideas are "nanofanciful notions that are not very meaningful."

That might have been the end of it, but someone named Diego, whose Twitter handle is @FutureBuckNasty, posted two replies to my series of tweets. The first read, "A lot has changed in 18 years [since the MIT article was published]. Smalley's critique of atomically precise manufacturing has been thoroughly discredited."

Diego referred to the late Richard Smalley, a Noble prize winner for being one of the team of scientists who discovered the molecule buckminsterfullerene (popularly known as buckyballs) and a leading figure in the development of nanotechnology. He was one of the scientists critical of Drexler's theories quoted in the MIT Technology Review article, but only one of several. He was not the source of any of the quotes I tweeted.

Diego's second tweet read, "Drexler's vision is now seriously being funded this year by the [Department of Energy's] advanced manufacturing office." The tweet linked to an announcement of a DOE workshop, held in August of 2015, entitled "Integrated Nanosystems for Atomically Precise Manufacturing."

A brief review of the materials posted for that workshop suggests that Diego's claim that the DOE is funding Drexler's vision may be overstated. The workshop was a discussion of research underway into integrated nanosystems and atomically precise manufacturing, but it was specifically defined as "informational only, and not as a binding commitment to develop or pursue projects." I don't know what projects DOE was funding at the time of the workshop, or what it has funded since then.

My guess is that this workshop was part of the federal government's goal to keep abreast of ongoing research in cutting edge technologies, at times helping fund that research, to ensure that the United States doesn't fall behind other countries in developing potential blockbusters. I would also guess that the amount of funding dedicated to this effort by the DOE department that sponsored the workshop does not signal a particularly aggressive interest in atomically precise manufacture. [1]

Note that the previous paragraph contains two guesses, and I admit I shouldn't be writing tweets or blog posts based on guesswork, especially when I'm attacking someone as vehemently as I attacked Jason Silva. Fortunately, one of my best friends knows infinitely more about nanotechnology than I do, so I asked him to comment on both Silva's video and on the DOE workshop.

My friend is Roger Cubicciotti. Roger is President and CEO of NanoMedica LLC, a nanobiotechnology company focused on molecular scale medical technologies. He has a Ph.D. in pharmacology and cell biophysics from the University of California, Berkeley, and a number of patents in nanotechnology-enabled molecular devices for drug discovery, drug delivery and diagnostic applications. This profile will tell you more about Roger and his current collaboration with colleagues from the Department of Microbiology and Immunology at Wake Forest University.

Well, Jason is certainly enthusiastic! He does get beyond the lame characterization of nanotech as "really small stuff."

However, his arguments that an ability to manipulate matter at the atomic level—by moving individual atoms—will provide us with control over matter is fundamentally flawed, in my opinion. The reason? Because matter is not just orderly assembly of atoms into macroscale objects. Atoms, subatomic particles, molecules comprising multiple atoms and supramolecular complexes are not just lumps of matter. They have shape, charge and other "personality traits" that preclude their being assembled manually like Legos without attention to the electrical and chemical properties of the atoms. They are not just billiard balls.

We do not yet comprehend the essence of matter, or energy for that matter. To presume the ability to manipulate matter at will is to presume we have sufficient comprehension of its properties to supervise it. This premise is simply not true.

Roger added that we may some day develop the capacity to manipulate matter at will, providing we don't pursue that goal so greedily and carelessly that we "blow ourselves up in the meantime." This points to the most significant omission of Silva's video: He never mentions the substantial risks that nanotechnology might pose, especially if and when it becomes anywhere near as powerful as he assumes it will. Once you let the genie out of the bottle, unintended consequences inevitably abound, as Eric Drexler himself acknowledged. "Arabian legend and universal common sense," he wrote in his book, "suggest that we take the dangers of such engines of creation very seriously indeed."

Here's Roger's comment on Diego's suggestion that the DOE workshop is evidence that Drexler's ideas are now being taken seriously by the scientific community:

[Diego] is very much correct that much of Drexler's insights have been validated in specific areas and that nanotech has achieved credibility in the scientific community. There has been substantial funding of nanotech by federal and state granting agencies, including NIH, NSF, DOD, DOE, NASA and others, most prominently through the National Nanotechnology Initiative with its billion dollar budget (though the purveyors of that program will likely concede that the impact of this investment is less significant than desired).

The bottom line here, I think, is yes, there's progress being made in nanotechnology, but it's a long way from producing the miraculous powers that Silva so confidently predicts. To say without qualification that nanotechnology is "about to transform the world in ways we can hardly even fathom," or that "it essentially makes the world a programmable medium that can be shaped by thought and intentionality," is not only false, it's irresponsible.

To inspire is one thing, to encourage technological intoxication is another. For centuries we've been told that this or that technology will deliver us to utopia. The condition of the world today affirms that while technology has indeed delivered many miracles, not a few of them have come with nightmares attached. Past experience teaches us that you don't plunge drunkenly forward without considering the consequences. Silva ignores all that to assure us that we'll be able to turn the world "increasingly into a condensation of human imagination." Whose imagination, he doesn't say. 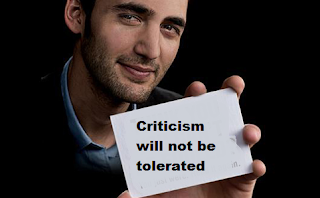 1. As Diego noted, the workshop was sponsored by the DOE's Advanced Manufacturing Office, which in 2015 distributed $200 million in grants aimed at increasing "U.S. manufacturing competitiveness." Of that amount, $84 million was dedicated to R&D projects, $92.5 million to R&D facilities and $23.5 million to "technical assistance." How much of these funds went to nanotechnology research and development is not stated in the overview provided for the nanotech workshop.