Chaos Monkeys: Pay No Attention to the Scam Behind the Curtain 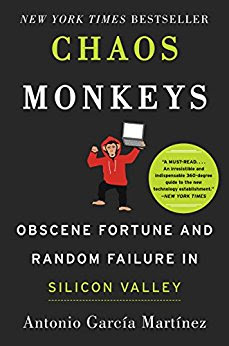 I've spent half my working life trying to convince anyone who would listen that the utopian promises of technology enthusiasts are now, as they always been, a bunch of hooey. The odor of grandiose self-regard emanating from Silicon Valley has been especially noxious. For the last thirty years or so the digerati have been proudly proclaiming that their products will save the world while their main achievement has been to harness the power of their tools to the engines of capitalist greed.

Those of us who have taken on the role of pointing out that the emperor has no clothes have been, with a few exceptions,* outsiders. Last year, however, a book called Chaos Monkeys: Obscene Fortune and Random Failure in Silicon Valley provided perhaps the most revealing insider look so far at the true character of the digital revolution as practiced in that rarified corner of northern California.

Written by Antonio García Martínez, a veteran of the startup wars who became a product manager at Facebook, Chaos Monkeys shows, not surprisingly, that just beneath the Valley's idealistic pronouncements (which, as García Martínez points out, are taken quite seriously by those who utter them) lie far more self-serving ambitions, pursued with degrees of amorality directly in proportion to the scale of riches to be won.

Unlike other insiders who have written critiques of Silicon Valley culture, García Martínez doesn't exempt himself from the cupidity he describes. He is a willing participant in the scramble for wealth as well as an observer of its internal contradictions and ethical vacuities.

But why not let García Martínez himself tell the tale? What follows are selected quotes, mostly from Chaos Monkeys (CM) with a few comments from post-publication reviews and interviews.

"I mean, the book isn't nice because Silicon Valley isn't a nice place. That's the reality."
(From Kara Swisher's interview with García Martínez for Recode Daily.)

“I was wholly devoid of most human boundaries or morality.”
(From CM, quoted by David Streitfeld in the New York Times.)

On García Martínez's negotiations with potential buyers of his startup company, AdGrok: "I lied…I still can’t believe the investors believed my numbers, but they did." (CM, p. 142)

“Anyone who claims the Valley is meritocratic is someone who has profited vastly from it via nonmeritocratic means like happenstance, membership in a privileged cohort, or some concealed act of absolute skullduggery." (CM, p. 229)

“I marveled at a world in which well-meaning, industrious, but naïve engineers are routinely manipulated by the glib entrepreneurs who seduce them into joining their startups, then relinquish them when they are no longer useful.” (CM, p. 73)

Truth is "a rather rare commodity" in the tech world, García Martínez says, and those he met who most vigorously declared their principled adherence to truth were "unusually attached to whatever well-groomed pack of lies they held dear.” (CM, p. 457-458)

“Even at the rarefied heights of economic elite, [the players you meet in Silicon Valley] are in truth scared, needy children playing at dress-up and pretending to be grown-ups.” (CM, p. 196)

“As I observed more than once at Facebook, and as I imagine is the case in all organizations from business to government, high-level decisions that affected thousands of people and billions in revenue would be made on gut feel, the residue of whatever historical politics were in play, and the ability to cater persuasive messages to people either busy, impatient or uninterested (or all three).” (CM, p. 8.)

"Everyone in Silicon Valley lives in what I like to call 'the eternal present.' It’s the urgent now of the next start-up, or the next cool technology or the next fundraising round or the next media event. No one ever pulls back and thinks: "What are they going to think of us in ten years or a hundred years?"
(From an interview with journalist Steven Levy, published on Amazon.com.)

"For all their presumptions of being subversive and bohemian and counterculture, whatever, Silicon Valley people actually maintain these very well-manicured exteriors, and frankly everybody has too much to lose. At the end of the day no one wants to pay the opportunity cost of saying the truth and missing out on, you know, being employee 70 at the next Pinterest or whatever. And so, yeah, they've just got too much skin in the game and they really don't care about posterity...They are complete reactionaries, very conservative and not nearly as liberal and tolerant as they think they are." (Recode Daily)

“Morality, such as it exists in the tech whorehouse, is an expensive hobby indeed.”
(CM, quoted by Bloomberg Business Week)

Darwin Among the Machines, Redux


Several articles recently have noted how New Zealand has become the escape hatch of choice for billionaires from Silicon Valley, who hope to take refuge on that remote island nation should some form of catastrophe overtake more settled regions of the planet. Among them is Pay Pal co-founder and Donald Trump advisor Peter Thiel, who’s so fond of the place he became a citizen there.

It’s ironic that the lords of tech would be hunkering down in the very spot where, some 150 years ago, one of the strangest and most prophetic meditations on the future of technology was written. I refer to Samuel Butler’s “Darwin Among the Machines,” which suggested — in jest — that Charles Darwin’s theory of evolution could apply to mechanical as well as biological organisms. Butler’s satire anticipated precisely the course of technological advance predicted today by Silicon Valley’s more extreme technology enthusiasts — the “transhumanists” — who believe that human intelligence will soon be exceeded by that of machines. Also like them, Butler envisioned the possibility that, should the growing powers of technology proceed unabated, humans would soon be working for their tools, rather than the other way around. As Butler put it in the conclusion to “Darwin Among the Machines," “man will have become to the machine what the horse and the dog are to man.”

How was it that a young Englishman of uncertain prospects could come up with such outlandish ideas while living in the wilds of New Zealand in 1863? His immigration at the age of 25 to the Anglican settlement of Christchurch was a compromise with his reverend father, who wouldn’t tolerate Butler’s desire to be an artist, but agreed to finance his attempt to become a frontier farmer. While there Butler became fascinated by On the Origin of Species and wrote “Darwin Among the Machines” as a playful extension of its theories. Published in the Christchurch Press under the name Cellarius, the essay became the basis for the famous “Book of the Machines” section of Butler’s fantasy novel, Erewhon, written after he returned to England and published in 1872.

In both works, seemingly commonsense ideas are gradually exaggerated to absurd conclusions, so slyly that readers could not have been certain Butler was kidding. “Day by day,” he wrote,

the machines are gaining ground upon us; day by day we are becoming more subservient to them; more men are daily bound down as slaves to tend them, more men are daily devoting the energies of their whole lives to the development of mechanical life. The upshot is simply a question of time, but that the time will come when the machines will hold the real supremacy over the world and its inhabitants is what no person of truly philosophic mind can for a moment question.
Our opinion is that war to the death should be instantly proclaimed against them. Every machine of every sort should be destroyed by the well-wisher of his species. Let there be no exceptions made, no quarter shown; let us at once go back to the primeval condition of the race. If it be urged that this is impossible under the present condition of human affairs, this at once proves that the mischief is already done, that our servitude has commenced in good earnest, and that we are not only enslaved but are absolutely acquiescent in our bondage.

Readers today, of course, would be even more likely to take the sincerity of such sentiments at face value, given that millions of us now spend a good part of our lives tethered to machines and millions more have reason to believe they may soon lose their jobs to machines, thanks to artificial intelligence.

At the time of Erewhon’s publication, many assumed Butler was making fun of Darwin, but he denied it. What Butler didn’t himself realize was that he’d planted seeds of doubt in his own mind concerning Darwin’s theory, doubts that would grow into an obsession. Between 1878 and 1887 he published four books challenging both the provenance of On the Origin of Species — Butler was convinced Darwin had reproduced without credit ideas previously put forward by several others, including Darwin’s father — and its conclusions. To Butler the process of natural selection as Darwin saw it eliminated the will of the organism, which Butler believed exerted a substantial influence on the course of its development. This has been seen by some as a forerunner of the conviction held by today’s transhumanists, who argue that, from spears to computers, humans have evolved and continue to evolve symbiotically with their technologies. Our devices, they contend, are nothing less than organs we’ve grown in order to forward our progress as a species.

The implications of this for New Zealand and the world as a whole are, for technology skeptics such as myself, less optimistic. Yes, technological development has over the centuries accounted for much that humans can celebrate, but it has also accounted for much to regret, not least the potential destruction of the Earth’s environment. The question is whether our symbiotic relationships with our tools are producing mutations that enhance our ability to survive or reduce it.

So it is that New Zealand’s unspoiled beauty has now become a place where billionaires whose fortunes have been built on technology can shield themselves from the ills their technologies have helped create. It’s enough to make one think that perhaps Samuel Butler’s suggestion regarding the rise of the machines might be taken seriously after all. Let every well-wisher of our species proclaim war to the death against them!