Everything is Connected (Human Waste Edition) 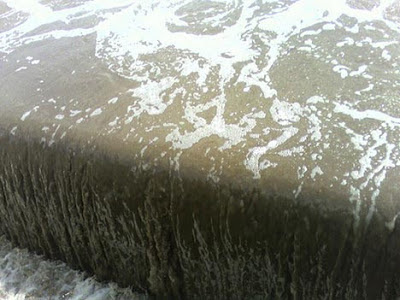 One of the fun things we have to look forward to as global warming advances: Rivers of raw sewage pouring into public waterways.

According to a new report by the nonprofit environmental group Climate Central, when Hurricane Sandy hit the East coast, more than 10 billion – billion! – gallons of raw and partly treated sewage poured directly into lakes, rivers, streams, and the ocean. Some of the overflow “bubbled up” (as the New York Times charmingly put it) onto streets and into homes.

The reason was simple. Treatment plants, most of which are built in low-lying areas near large bodies of water, were unable to handle Sandy's storm surge, especially when they lost electrical power. The only recourse was to start dumping. The report said enough overflow was released to cover New York's Central Park with a pile of poop more than 40 feet high.

One way or another, this will be one of the myriad ways we’ll all pay for climate change as the frequency and intensity of storms increase and sea levels rise. Either we pump massive amounts of taxpayer dollars into upgrading sewage treatment facilities or we get used to wading through shit.