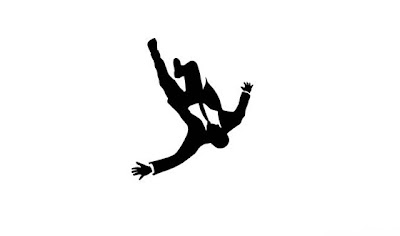 AMC's Mad Men returns in March, but already the advertising for this show about advertising has successfully stirred a bit of controversy.

I refer to the video teasers and posters that exploit the Falling Man motif of the show's opening title sequence. The vertiginous imagery is controversial because it evokes, intentionally or not, one of the most harrowing news photographs ever taken: that of the "falling man" plunging to his death from the World Trade Center on 9/11.

I'm a fan of Mad Men, but I'm also among those who find the title sequence disturbing. That's not because of any personal connection to 9/11, I don't think, although as a longtime resident of New York, it hits close enough. The source of my reaction is the power of the Falling Man photograph itself.

I'm not the first to observe that the Falling Man image is evocative on at least two visceral levels. It captures, in an excruciatingly personal way, the literal terror of 9/11. It also captures what it feels like, existentially, to be living in a world of terrifying uncertainty. The source of our anxiety isn't only terrorism, although that's part of it now. It's about a loss of psychic footing in a world of overwhelming change.

Critics have noted an infatuation in contemporary culture with nostalgia. This isn't surprising, given the degree of change that's subsumed us lately, and that's subsumed us ever since Watt introduced his steam engine. The past, unlike the present, offers something to hold onto. No accident that even as the Industrial Revolution raged around them, Victorians celebrated medieval chivalry and piety, lounging in drawing rooms that excluded, as Lewis Mumford put it, “every hint of the machine.” World War I brutally ended any illusion that the machine could be kept at bay, an awakening depicted on the current season of PBS's Downton Abbey.

Mad Men gets terrific mileage out of nostalgia, but we also enjoy knowing a secret the show's characters mostly don't: that their world is about to be turned upside down. Executive producer Matthew Weiner suggested in a recent interview that the dislocating effects of change may be Mad Men's most important underlying theme. Specifically he noted the plaintive question asked by a character in the third season: "When is everything going to get back to normal?”

We know that change has been a constant of human affairs, of course, but we also know that technology has amplified the pace and scale of change exponentially. It's interesting that Alvin Toffler's concept of "future shock" doesn't get talked about much any more, despite the fact that the acceleration of technological change responsible for that state of psychological dislocation has, as he predicted, only increased in the decades since he coined the phrase. Would-be tech billionaires are fond of bragging that the application or device they're selling promises to be the most "disruptive" technology to come along since Google and Facebook, but even if they succeed they'll soon be looking over their shoulders for the next disruptive technology coming round the bend, as Google and Facebook already are.

In one form or another, the Falling Man has become the archetypical figure of the technological era, spinning his way into space from a center that cannot hold. A standard-bearer of Gilded Age displacement was Henry Adams, who in the opening pages of his autobiography described himself wondering, "What could become of such a child of the seventeenth and eighteenth centuries, when he should wake up to find himself required to play the game of the twentieth?...No such accident had ever happened before in human experience. For him, alone, the old universe was thrown into the ash-heap and a new one created."
Adams was far from alone, but it was no surprise he felt that way. Isolation is another symptom of the psychology of modernism –  and another primary theme of Mad Men, according to Matthew Weiner. The nineteenth century versions of "future shock" were Marx's "alienation" and Durkheim's "anomie." In 1897 Durkheim published a study on the alarming rise in the number of suicides across Europe, a rise he attributed to the "morbid disturbance" caused by "the brilliant development of sciences, the arts and industry of which we are the witnesses." The work of centuries, he said, "cannot be remade in a few years."

We're often told that in order to maintain some semblance of balance in the world technology has made, we have to get used to the fact that everything is never going to get back to normal. So it is that the nostalgic appeal of Mad Men is precisely equivalent to that of Downton Abbey: We get to watch complacently as complacency is overturned.