Everything is Connected (Petraeus Scandal Edition) 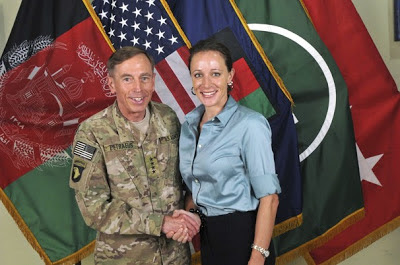 As many have noted, technology – specifically, email accounts – played a central role in the ongoing scandal involving the resignation of CIA Director David Petraeus. "Harassing" emails sent to socialite Jill Kelley led to the FBI's discovery of emails that revealed Petraeus' affair with Paula Broadwell; other emails led to the discovery of questionable exchanges between Kelly and another top-ranking official, General John R. Allen; subsequent searches found classified documents on the hard drives of individuals who weren't authorized to have them.

With the indispensible assistance of the media, reverberations have been ricocheting furiously up and down the corridors of power and gossip from Washington and Langley to Florida, Afghanistan, and Libya since the scandal broke last Friday. It's not the first time these elements have combined to produce a sensation, but it’s the messiest we've seen lately.

The Petraeus scandal demonstrates the dynamics of a phenomenon known in organization theory as the "tightly coupled system." The concept was introduced by Charles Perrow in his 1999 book, Normal Accidents: Living with High-Risk Technologies. Computer programmers use the term to describe systems in which central processing units share some or all of the system’s memory and input/output resources.

The elements at play in the Petraeus scandal are more heavily weighted toward the human than the examples Perrow deals with in his book, which include nuclear and petrochemical plants, airplanes, mines, and weapons systems. Nonetheless, because his emphasis is so strongly systemic, and because the systems in question always rely on some combination of technology and human beings, his ideas can be fairly applied.


As the name implies, tight coupling describes a system in which an intimate connection exists, intentionally or not, between its component parts. This connection creates a potentially volatile interdependence as changes in one element of the system quickly reverberate throughout, setting off a chain reaction of associated effects. A simple example is a freeway at rush hour, when a stalled car in one lane causes a backup that stretches for miles.


The stalled car example demonstrates, as does the Petraeus scandal, that in tightly coupled systems small events can quickly mushroom into crises on a different order of magnitude. After-the-fact accident analyses, Perrow says, consistently reveal "the banality and triviality behind most catastrophes."

Perrow writes somewhat ruefully that all too often it's the human factor that introduces the fatal flaw into technological systems that are, because of their complexity, already primed for error. "Time and again warnings are ignored, unnecessary risks taken, sloppy work done, deception and downright lying practiced," he says. "Routine sins" plus technology equal "very nonroutine" consequences.

Perrow also stresses that, as careful as we think we are, it's impossible to anticipate every consequence of any action taken within a tightly coupled system – the potential reverberations are beyond our comprehension. What we see isn't only unexpected, he adds, it's often, at least for awhile, "incomprehensible." This can be true either because we're not aware of the consequences as they gather momentum, or because we're aware of them but can't bring ourselves to believe they're really happening. One assumes the principles in the Petraeus scandal have experienced both conditions.


Note: An earlier essay in this space discussed the part that the dynamics of tightly coupled systems played in the Challenger space shuttle disaster.
.