"The worm has turned.”

So said an NYU professor in a recent New York Times article, speaking about the sudden reversal that's taken place over the past few months in the public image of Silicon Valley. Once seen as the coolest guys in the room, as well as the richest, the tech wizards driving the digital revolution—the hoodie-wearing hipsters at Facebook, Google, Twitter, Amazon and Apple in particular—are now being blamed for a host of social, cultural, psychological, political, and economic problems, from the erosion of our attention spans to the election of Donald Trump.

The denunciations have a consistent, hostile theme: we were suckers to ever believe that Silicon Valley companies have our best interests at heart, as their CEOs frequently claim they do, and now we're paying the price.

To name a few examples, in September Salon ran a piece entitled "What If Silicon Valley Is to Blame for All This?" while Fast Company sought to explain "Why the Public's Love Affair With Silicon Valley Might Be Over." The pace picked up in October. On the ninth TechCrunch's Ross Baird published an open letter proclaiming, "Dear Silicon Valley: America’s fallen out of love with you" and a day later the Washington Post ran an opinion piece by Pierre Omidyar, the founder of eBay, that listed "6 ways social media has become a direct threat to democracy." Two days after that Farhad Manjoo, technology columnist for the Times, wrote a piece entitled "Why Tech Is Starting to Make Me Uneasy," followed the next day by Alexis Madrigal's analysis for the Atlantic.com, "What Facebook Did to American Democracy" and another piece in the Times, David Streitfeld's "Tech Giants, Once Seen as Saviors, Are Now Viewed as Threats," followed a day later by a Sunday Review commentary in the Times by Noam Cohen entitled "Silicon Valley is Not Your Friend." 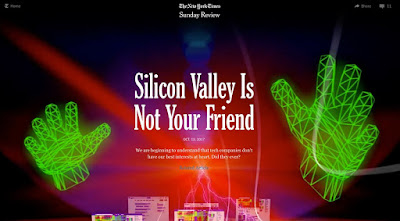 The latter column was excerpted from Cohen's soon-to-be-published book, The Know-It-Alls: The Rise of Silicon Valley as a Political Powerhouse and Social Wrecking Ball, the latest in a series of long-form attacks on the Lords of Digital that includes Franklin Foer's World Without Mind: the Existential Threat of Big Tech, Jonathan Taplin's Move Fast and Break Things: How Facebook, Google, and Amazon Cornered Culture and Undermined Democracy and Scott Galloway's The Four: The Hidden DNA of Amazon, Apple, Facebook, and Google. According to its publisher, Galloway's book "deconstructs the strategies of the Four that lurk beneath their shiny veneers." The implication is clear: strategies that lurk beneath shiny veneers aren't to be trusted.

Criticisms of Silicon Valley's products and practices aren't new, of course. Alexis Madrigal's piece in the Atlantic traces a long history of articles on Facebook's influence on elections, and concerns about the theft of personal financial data by hackers, about social media's echo chamber effects and about the dominance of Amazon and Google over culture and commerce have, likewise, been percolating for years. It's the vehement tone and sharp upward trajectory of the critical curve that's been striking—Harvey Weinstein's downfall has been only slightly more precipitous. It's hard to know whether these press reports accurately reflect the mood of the country, but judging from the angry comments that have been posted in response to many of these articles, it seems likely that they do. 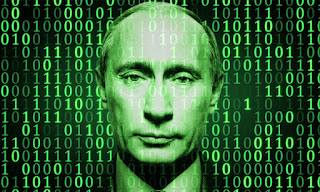 No doubt the tipping point was the online role Russian propagandists played in Trump's victory, which I suspect only served to agitate simmering fears over the potential impact of artificial intelligence on jobs and the growing divide between winners and losers in today's technology-driven economy, not to mention anger about Silicon Valley's rampant sexism. Suddenly it seems we've moved from a gradual accretion of misgivings to a collective spasm of national indignation.

All for good reason, in my opinion. I've been worrying and writing about the deleterious effects of technology for more than twenty years, and up until fairly recently have been accustomed to feeling like the grumbling geezer at the party, standing in the corner muttering about how we're all headed to hell in a hand basket. This latest wave of opprobrium has caused me to succumb, I admit, to one of my less appealing qualities, a fondness for saying "I told you so."

This doesn't mean my objections have been the least bit original. To the contrary, doubts about the corrosive impacts of technology have been with us at least since the ancient Greeks, who distrusted technical skill because it threatened to bestow power upon those least likely to use it responsibly. The philosopher of technology Langdon Winner has written that challenges to the certitude of technology enthusiasts have been consistent enough in the history of Western thought to constitute what he calls a "counter-tradition to the dream of mastery." In this counter-tradition, Winner writes, "the world is not something that can be manipulated or managed with any great assurance. The urge to control must inevitably meet with frustration or defeat." Notable contributions to the genre include Goethe's The Sorcerer's Apprentice and Faust and Jonathan Swift's takedowns of Francis Bacon's disciples in Gulliver's Travels. 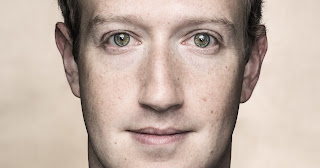 Mark Zuckerberg's frequent assertions that Facebook's mission is to enhance interpersonal connection and build global community always remind me of a comment that the late scholar Marshall Berman made about Faust. One of Goethe's points in the play, Berman said, was that "the deepest horrors of Faustian development spring from its most honorable aims and its most authentic achievements." Lately I've also been wondering if perhaps Zuckerberg might be sympathizing with Mary Shelley's good doctor, Victor Frankenstein, who sinks into fatal mortification as he realizes where his glorious ambitions have led. "Like the archangel who aspired to omnipotence," Frankenstein cries, "I am chained in an eternal hell!... I trod heaven in my thoughts, now exulting in my powers, now burning with the idea of their effect."

Shelly's was one of a chorus of uneasy voices that rose in response to the revolutions of science and technology in the eighteen and nineteenth centuries, much as a chorus of voices is rising now in response to the destructive influences of Silicon Valley. "Tools are in the saddle,/and ride mankind", wrote Ralph Waldo Emerson; "Men have become tools of their tools," said Henry David Thoreau. Both were influenced by Thomas Carlyle, who like Shelley recognized that forces had been unleashed that could not be contained. "The shadow we have wantonly evoked stands terrible before us," he wrote, "and will not depart at our bidding."

There's another point to be made about the counter-tradition to the dream of mastery. You'll note that the exponents of that counter-tradition I've mentioned all wrote long before the emergence of the Internet. Their warnings resonate today because, as the Greeks understood, hubris is a natural byproduct of the powers that all sorts of technologies put in our hands. The boy kings of Silicon Valley (to borrow Katherine Losse's term for the guys she worked with at Facebook) are only the latest to discover, too late, that those powers come laden with unintended consequences. 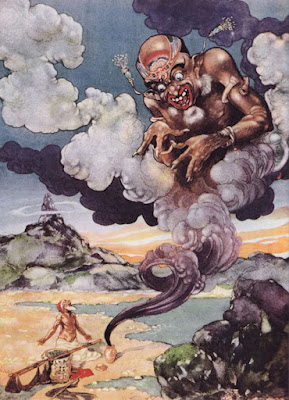 Norbert Wiener, one of the founding fathers of the information revolution, was adamant on this score. Citing the “Fisherman and the Genie” fable in One Thousand and One Nights and W.W. Jacobs’ short story, “The Monkey’s Paw,” he wrote disdainfully of the "gadget worshipers" among his peers, men who were eager to employ the "magic" of technology without bothering to consider their ability to control that magic. The appropriate exercise of scientific and technological power requires "a sense of the tragic," he wrote. Only those who appreciate how badly things can go wrong will comprehend that true security is a product of "humility and restrained ambitions." Lacking those qualities, he added, a painful lesson will be learned: Technology is a two-edged sword, "and sooner or later it will cut you deep."