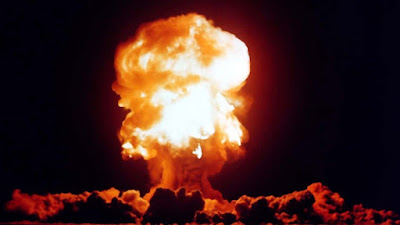 At a little after 8 am Saturday morning, people in Hawaii received the following message on their cellphones: “BALLISTIC MISSILE THREAT INBOUND TO HAWAII. SEEK IMMEDIATE SHELTER. THIS IS NOT A DRILL.”

It took the Hawaii Emergency Management Agency 38 minutes to advise that the message had been an error – as a spokesman later explained, “Someone clicked the wrong thing on the computer.” During that 38 minutes, thousands of terrified residents and visitors scrambled to figure out what they should do. Internet searches for “how to survive nuclear” spiked dramatically, going from almost non-existent to more than doubling the number of searches for “how to make pasta.” 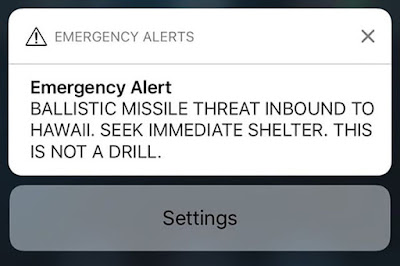 Scary as Hawaii’s morning was, there have been numerous false alarms that brought us a lot closer to a real nuclear holocaust than we were yesterday. Journalist Eric Schlosser has documented a number of them, including a 1986 incident in which President Jimmy Carter’s national security advisor, Zbigniew Brzezinski, was awakened in the middle of the night by an aide who informed him that Soviet submarines had just fired 220 missiles at the United States. Brzezinski knew that a retaliatory strike would have to be ordered immediately; the missiles would hit Washington within minutes. Moments later his aide called again: His earlier report had been mistaken. In fact, 2,200 missiles had been launched.

As we now know, nuclear annihilation did not occur that morning. Before Brzezinski reached the President, his aide called a third time. No missiles had been fired. Later it was discovered that the attack report had been caused by the malfunction of a 46-cent computer chip at North American Aerospace Defense headquarters.


Until recently, fears of nuclear holocaust had faded quite a bit from public attention. Belligerent exchanges between Donald Trump and North Korea’s Kim Jong-un changed that. We seem to be edging back toward the nervous atmosphere of the Cold War, when suburbanites built bomb shelters in their back yards and school children learned to “duck and cover” should air raid sirens signal that Soviet missiles were coming. 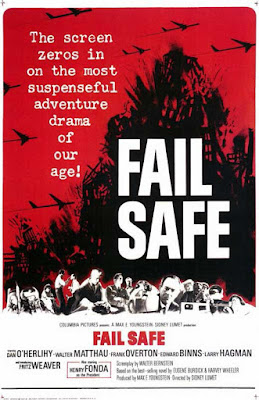 One artifact from that era, the 1964 movie Fail Safe, documented in chilling fashion how a breakdown in technology could instigate nuclear war. Schlosser’s reporting and yesterday’s incident in Hawaii are reminders of how prescient the movie (directed by Sidney Lumet from a screenplay by Walter Bernstein, based on the 1962 novel by Eugene Burdick and Harvey Wheeler) was. What follows are descriptions of four scenes from the film. Warning: there are spoilers throughout.

Scene 1: A U.S. Congressman named Raskob (played by Sorrell Brooke) and an electronics company executive named Knapp (Russell Collins) are touring the Strategic Air Command facility in Omaha, Nebraska. A giant screen shows the positions of American fighter squadrons, armed with nuclear bombs. These squadrons are in the air continually, ready to head toward targets in Russia should SAC’s surveillance system detect a Soviet attack. The following conversation takes place as an Air Force general named Bogan (Frank Overton) leads the tour, picking up just after he’s explained how SAC’s monitors closely track Soviet activity on the ground as well as in the air.

Congressman Raskob: I'll tell you the truth, these machines scare the hell out of me. I don’t like the idea that every time I take off my hat, something up there knows I'm losing my hair. I want to be damn sure that thing doesn't get any ideas of its own.
Mr. Knapp: I see what you mean Mr. Raskob, but that's the chance you take with these systems.
Raskob: Who says we have to take that chance? Who voted who the power to do it this particular way? I'm the only one around here who got elected by anybody, and nobody gave me that power.
Knapp: It's in the nature of technology. Machines are developed to meet situations…
Raskob: And then they take over and start creating situations.
Knapp: Not necessarily.
Raskob: There's always the chance. You said so yourself.
General Bogan: We have checks on everything, Mr. Raskob. Checks and counterchecks.
Raskob: Who checks the checker? Where's the end of the line, General? Who's got the responsibility?
Knapp: No one.
Bogan: The President.
Raskob: He can't know everything that's going on, now can he? It's too complicated. And if you want to know, that's what really bothers me. The only thing that everyone can agree on is that no one's responsible.

Scene 2: A group of government officials and military officers is meeting in a Pentagon conference room for a presentation on nuclear war strategy by Professor Groeteschele (Walter Matthau). Groeteschele is an aggressive proponent of the defense strategy known as “mutually assured destruction.” His views are challenged by an Air Force Brigadier General named Warren A. “Blackie” Black (Dan O’Herlihy).

General Black: We're going too fast. Things are getting out of hand….We're all trying to make war more efficient, and we're succeeding. We now have the capacity to blow up the whole world several times over.
Professor Groeteschele: Which does not mean we must do it.
Black: We won't be able to stop from doing it…We're setting up a war machine that acts faster than the ability of men to control it. We're putting men into situations that are getting too tough for men to handle.
Groeteschele:  Then we must toughen the men!

Scene 3: SAC’s surveillance system has detected an unidentified aircraft crossing into U.S. airspace, prompting a defense alert and a heightening of response measures. After a few tense minutes the potential intruder is identified as an off-course commercial airliner and the alert is cancelled, but a computer error causes one American bomber to continue on an attack trajectory toward Russia. As military personnel work to recall it, the command center in Omaha is connected via speaker phone to the conference room in the Pentagon, allowing the Secretary of Defense and other officials to discuss options. At one point the electronics industry executive Knapp interrupts to make a point regarding the technology involved.

Knapp: The more complex an electronic system gets, the more accident prone it is. Sooner or later it breaks down…A transistor blows, a condenser burns out…sometimes they just get tired, like people.
Prof. Groeteschele: Mr. Knapp overlooks one factor: the machines are supervised by humans. Even if the machine fails, the human being can always correct the mistake.
Knapp: I wish you were right. The fact is, the machines work so fast, they are so intricate, the mistakes they make are so subtle, that very often a human being just can't know if a machine is lying or telling the truth.

Scene 4: Russian defense systems succeed in jamming all attempts to recall the wayward bomber; it continues on its attack trajectory toward Moscow. The American president (Henry Fonda) speaks to the Soviet premiere (unseen) from an underground communications center. He informs him that the bomber’s pilots may be able to evade Soviet defenses. In order to avoid retaliatory attack by the Russians and full-scale nuclear war, the President promises that, if Moscow is destroyed, he will order an American jet to drop a nuclear bomb on New York City.

The unthinkable happens, prompting a final exchange between the President and his Soviet counterpart. This tragedy, the Premiere says, was nobody’s fault, no human being is to be blamed. The President responds:

He describes the day’s events as "a taste of the future."