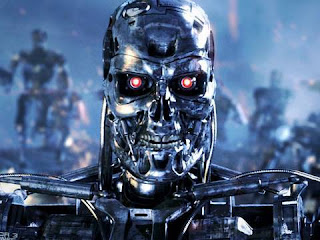 This isn't a blog devoted exclusively to the issue of technological unemployment (see my previous post), but I thought in fairness I should note that the manufacturers of robots are fighting back against those who argue that rapid advances in automation pose a growing threat to jobs.

A dispatch from the Automate 2013 trade show in Chicago appeared in the New York Times today. It quoted industry representatives as maintaining that nothing has changed: Technology will continue to create jobs rather than eliminate them, as it always has. The Luddite Fallacy, in other words, remains a fallacy.


1) The main purpose of automation is to replace workers, and we're getting much, much better at it.

2) The roboticists' optimism makes sense only if we follow a path the planet can no longer afford: constant economic growth based on constant increases in the production and consumption of manufactured goods.

3) The sorts of jobs that automation promises to create are either highly skilled or dehumanizing. Let's not kid ourselves that we'll retrain every factory worker to be an engineer, or an entrepreneur.


The debate will continue, no doubt, but nothing will stop the ongoing development of robotics. The incentives for employers are too powerful to resist, and there's no consensus for restraint.

(And no, the illustration here is not one chosen by the International Federation of Robotics.)