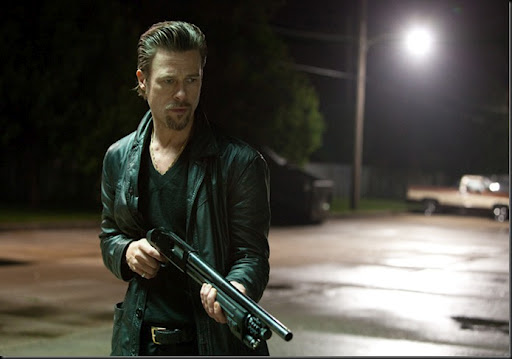 Apparently Brad Pitt's latest movie, which premiered yesterday at the Cannes Film Festival, is an attack on capitalism, at least as it's currently practiced in America. An article in the Los Angeles Times describes "Killing Them Softly" as a "post-Occupy" film and "what the documentary 'Inside Job' might look like if it was a fictional feature."

"Inside Job," you may recall, is director Charles Ferguson's Oscar-winning examination of how Wall Street speculation and duplicity led to our current economic crisis. The action in "Killing Them Softly" (due in theaters next fall) takes place during the stock and housing market crashes that got the current crisis rolling; visible in the background are clips of presidential candidates Obama and McCain making promises (still unfulfilled) of economic reform. Director Andrew Dominik's underlying theme, the Times says, "is that U.S. capitalism is deeply flawed, and that government, whether Democrat or Republican, has let down its people."

According to the Times, "Killing Them Softly" was financed by Megan Ellison, the daughter of Larry Ellison, the co-founder and chief executive officer of the software company, Oracle. The third richest man in America, Ellison is reportedly worth more than $35 billion, a fortune produced by that magically powerful combination of technology and capitalism. Brad Pitt, of course, is one of the biggest movie stars in the world, an icon whose stature is a product of that same magical combination (in addition to good looks and acting talent).

I'm an admirer of Brad Pitt, who, like George Clooney, has gone out of his way to use his Hollywood clout to make meaningful movies, both as works of cinematic art and as commentaries on important issues of the day. Not every film Pitt and Clooney make fits that category, but they're obviously trying. The problem, as I'm sure they know, is that those films owe their existence to the system they sometimes attack. If they're successful they also feed that system. This was an issue addressed by the philosopher of technology, Jacques Ellul, who pointed out how easily the technological system can absorb the supposedly rebellious products of popular culture. “I am somehow unable to believe," he wrote, "in the revolutionary value of an act which makes the cash register jingle so merrily.”

My favorite example of this contradiction is the DreamWorks logo, which features an idllyic image of a boy with a fishing pole, sitting, one imagines, by a peaceful lake on a summer's afternoon, lost in a reverie. This, of course, is exactly the sort of old-fashioned pastime that DreamWorks, with all the technological and marketing power at its disposal, is doing its best to make obsolete. Boys won't be spending their summer afternoons lolling peacefully by lakes if DreamWorks has anything to say about it. Rather, they'll be sitting inside multiplexes in shopping malls, hypnotized by reveries conjured for them by the latest extravaganzas of computer animation.