Home or Frontier? On the Ambiguity of "Gravity" 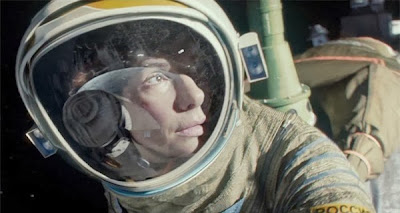 Over the past couple of days I’ve had some further thoughts on the movie Gravity. (My initial post, "Where Gravity Meets Bedford Falls," can be read here.) Anyone who hasn’t seen the film and who cares about not having the plot spoiled should read no further; what follows is all spoiler.

The movie resonates in some interesting and ambiguous ways with a central recurring theme in our pursuit of technology: the lust to open and occupy new frontiers. The lure of the frontier has also been a central recurring theme in American history, of course, which is one of the main reasons American history has been so inexorably tied to technology. Gravity’s director and co-writer, Alfonso Cuarón, is Mexican, so perhaps those themes don’t interest him, but they interest me.

The direction of Gravity’s plot makes it, in a basic sense, an anti-frontier movie. It’s all about the need of Sandra Bullock's character, Dr. Ryan Stone, to return to Earth. She has to get home. There’s no mission to explore an unknown planet, destroy a threatening asteroid, or investigate mysterious transmissions from Jupiter. The plot hinges on what is, in essence, an industrial accident during a routine repair mission a few hundred miles above Earth. 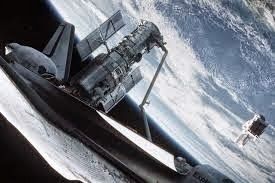 What’s not routine is our reaction as viewers to that routineness. It’s clear from the reviews and blog entries on Gravity that people have been stunned and moved by the beauty of Earth as it’s depicted from the astronaut’s perspective. Also stunning is Cuarón’s depiction of the awesome vastness of space. The genius of  the film—the reason people find it so effecting—is the way Cuarón positions his human characters between those two poles. Seldom has the strangeness of our position in the cosmos been defined so starkly. Dr. Stone’s desperation to return to Earth is more than a fight for survival. It’s a flight from existential terror.

I don’t think Cuarón has any particular ax to grind for or against technology, but it’s hard not to notice in Gravity how alien the space environment is for the humans who are moving around in it. This is something that’s always mystified me about space enthusiasts. I understand being motivated by the adventure of exploring space, but the appeal of actually living there escapes me. You can’t breathe in space! Or walk! You have to put on an incredibly bulky suit every time you go out the door. It seems like it would get old pretty fast.

As many critics have pointed out, Dr. Stone's psychological motivation is to come home not only from outer space, but also from her disconnection from life. Having lost a daughter in a freak accident, she loses herself in work, and in long drives to nowhere after work. This suggests that Cuarón might be commenting on the technological project, after all. Is he saying that space exploration is equivalent to an escapist drive into the night?

Probably not. In fact, Gravity’s concluding scene can be seen as suggesting exactly the opposite, though its meaning seems more than ambiguous: It seems downright contradictory. On the one hand, when Stone pulls herself up on the shore, gasping for air and grasping terra firma, we see an affirmation of how good it is for her to be back where she belongs. She’s isn't running away anymore. She’s alive, and grateful to be alive: she can embrace the pain that comes with the joy of existence. Meanwhile the debris from the disintegrated space ship flame out in the sky above her. She’s home, and space travel seems behind her.

Or is it? Stone dragging herself onto the beach is an obvious allusion to humankind pulling itself out of the ocean and onto land to begin its evolutionary adventure as a terrestrial species. In case we miss the point, Cuarón shows us a frog swimming alongside Stone as she escapes the sinking space capsule and swims toward the water’s surface. Once on dry land, Stone doesn’t just lie there. She pulls herself to her feet and stands, and the low angle from which Cuarón shoots her rise leaves no question that he wants us to consider her standing a courageous, heroic act of will.

All this seems to suggest not so much that Stone has learned to accept the limitations of life on Earth, but that she’s found a new determination to accept no limits. It’s a testament to the indomitability of the human spirit, to the implacable drive for progress that brought us out of the primordial soup and took us to…well, outer space! In contrast to the queasiness with which Bulloch’s character reacts to being in space at the beginning of the picture, she seems ready now to take on any challenge. It’s only a matter of time before she’ll be back in orbit, aiming to break the EVA record set by her now-dead colleague, Matt Kowalski, exploring, with plucky good humor, the next unexplored frontier.

Teilhard de Chardin and Buckminster Fuller would have loved it.