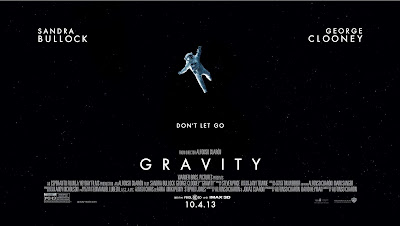 [ Note: I updated this post on January 30, 2014, to add the comment  in brackets below from an interview with Alfonso Cuarón that appeared in the New York Times that day.]

Having seen the advertisements beforehand, I wasn’t surprised that it was highly reminiscent of a particular sequence in Stanley Kubrick's 2001: A Space Odyssey, a sequence that includes one of the two most powerful film images I've ever seen. 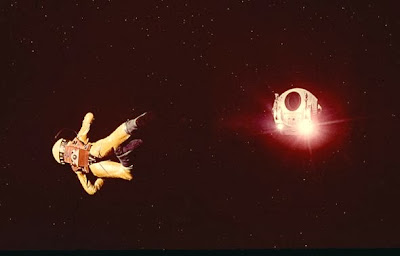 The image (a starker version of the one here) is of Gary Lockwood’s character, Dr. Frank Poole, spinning off into space after being cut loose by the renegade super computer HAL. It's an evocation of existential isolation that profoundly moved me when I first saw it, as a teenager stoned on acid in a San Francisco movie theater in 1968, and that has stayed with me ever since.

[ Months after I'd posted this, during the late January build-up to the Oscar awards, the New York Times ran an article on the three top contenders for the Best Picture award. Gravity was one of them, and in the article Alfonso Cuarón comments on the idea that inspired him and his co-writer (and son), Jónas Cuarón, to make the film:

“The simple image of an astronaut spinning into the void. We talk about how terrifying that would be. We also recognize immediately the metaphorical possibilities.”

The video that accompanies the article includes a shot from Gravity that is strikingly similar to the shot I remember from 2001. ]

Cuarón's film plays on the theme of existential isolation, too, but not, for me, as effectively as Kubrick's. The reason for that, I suspect, is that in Gravity the problem of aloneness is at the center of the action, explicit and ultimately resolved. In 2001, it's always there, but in the background, much as it is in our day-to-day consciousness.


The other image that’s always moved me, by the way, is from Frank Capra’s It’s A Wonderful Life. 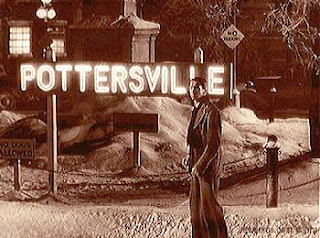 It comes in the sequence where Jimmy Stewart’s character, George Bailey, stumbles in horror down the streets of Pottersville, the sleazy city that Bedford Falls will turn into if George kills himself.  (The image here isn’t precisely the right one, either, but it’s the closest I could find.) What always struck me about that image is how soundly it trumps the film’s saccharine ending. In real life, George’s nightmare came true. To some degree we all live in Pottersville now, in large part due to the exigencies of technique. 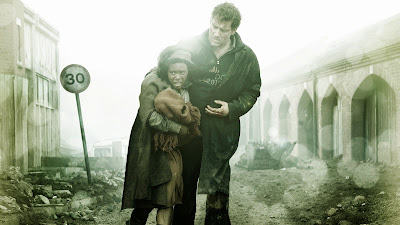 Alfonso Cuarón's previous film, Children of Men, provides a pretty convincing idea of what Pottersville might, before too long, become.