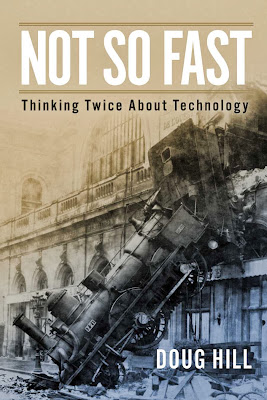 A personal note: I've been absent from this space for the past couple of months as I've worked to prepare my book for epublishing. That process is nearly complete.

Not So Fast is going through the final formatting stages at BookBaby (ah, technology!) and should be available at Amazon, iTunes, Barnes and Noble, and a bunch of other e-publishing sites within a month, probably sooner. I'll let you know when.

Not So Fast is the result of some twenty years of study of the history and philosophy of technology, and the product of some three years of writing and rewriting. I'm very proud of it, and very happy that it's at last going to be out there for people to read.

As I've shared in another post, this blog was originally aimed at helping me find a traditional publisher by building a following as a commentator on technology. The exercise has proved both frustrating (I still haven't found a traditional publisher) and rewarding (I've immensely enjoyed the art of essay writing and have gotten some satisfying response to my efforts). Now that the book's almost out, I'll return to those labors.

Thanks to all those who have been with me so far.